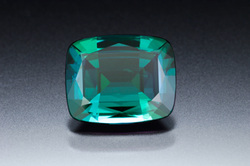 Alexandrite June Birthstone - Silver jewelry
Alexandrite is a relatively modern gem and was first discovered in Russia in 1831 during the reign of its namesake, Czar Alexander II.

It's most remarkable property is that it reflects different colors in different types of light. It will reflect light red to reddish purple in artificial light(incandescent), and green or greenish blue in sun light.

Healing properties - Alexandrite is a stone with strong powers; it reacts to a change in the wearer’s health by changing its color. It is believed that Alexandrite can improve blood circulation and strengthen blood vessels.

Magical properties - It is believed that Alexandrite establishes harmony between physical and mental bodies of the person, making its wearer more peaceful and compliant. Alexandrite strengthens creative abilities and fosters imagination.

Alexandrite is the birthstone for the month of June.   Element: Air, Water 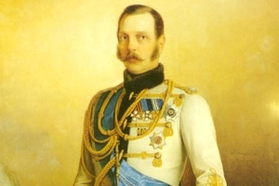 Tsar Alexander II
On 17 April 1834, the Russian Empire was celebrating the sixteenth birthday of the future Tsar Alexander II. At around the same time, a color changing gemstone was found in the Urals Mountains and the noble story of the most scarce and fascinating precious stone was born and irrevocably associated with Alexander II, through being named in his honor -- Alexandrite.

Alexandrite became symbolic of the reign of Alexander II, and the stone colors of red and green echoed the principal colors of Imperial Russia. Moreover, the magic of the changing colors directly reflected the thoughts of a society ruled by Tsars since 1480.
The early part of Alexander II reign was characterized by sweeping reforms and his liberal approach earned him the title of "Tsar Liberator". The green of Alexandrite in daylight was taken to represent the hope and revival brought to Russia by Alexander II´s efforts. Unfortunately, freeing the serfs led to it´s own problems, and
Alexander II had to act more decisively and to take his reforms to their logical conclusion.

On March 13, 1881 during his visit to St. Petersburg, he was murdered by revolutionists. Alexander II lay motionless upon the snow, profusely bleeding... Red color. Color of blood and revolution. Color of the evening and the color of Alexandrite in candle light.