Peridot August Birthstone - Silver jewelry
Peridot is the gem variety of the mineral olivine, a magnesium iron silicate, and it has a bright yellow-green to green color.

The Egyptians fashioned peridot beads as long as 3500 years ago. Turkish Sultan's amassed the largest collection of peridot during the Ottoman Empire, and there are thousands of peridots on view at the Topkapi Museum in Istanbul.

Healing properties - Peridot jewelry may be beneficial for stabilizing blood pressure and overall heart health. It is also recommended to people with eye ailments and various spinal cord problems.

Magical properties - Peridot is believed to strengthen the spiritual forces of the owner, develop the gift of intuition, and moderate anger. Peridot is favorable for personal relationships, both for strong friendships and marital bonds. Peridot is excellent for bringing in abundance energy. Helps to increase feelings of self worth and love. Great stone to use when beginning a new business if in alignment with both heart and mind.  Napoleon once offered a gift of Peridot to Josephine as a symbol of his undying love and admiration.

Peridot is the birthstone for the month of August.    Element: Earth, Air 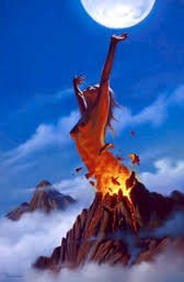 Pele, the Volcano Goddess. Peridot. August birthstone
Peridot, Gift of the Volcano Goddess
According to Hawaiian folklore, Pele is the goddess of the volcano, described as “She who shapes the sacred land” and her temper was known to be both as dangerous as the lava. In Hawaii it’s impossible to avoid the evidence of her power and generosity. Since 1983, her volcano has destroyed more than 100 structures on the Big Island,while adding more almost 100 acres to the island.

Glistening green peridot is a volcanic gem formed in the deep fires of the earth; on Hawaii, it is treasured as the tears of Pele. An entire beach in Oahu is formed of peridot sand, worn to powder by the ocean. Pele’s gift of peridot is thought by many to have great power to heal, and to bring wealth and growth. Its beautiful green-gold color perfectly complements an Island tan, and sparkles just as brilliantly at night as in the sun.