Turquoise December Birthstone - Silver Jewelry
Turquoise varies in color from greenish blue, through robin's egg-blue, to sky blue shades and its transparency ranges from translucent  to opaque. Turquoise is plentiful and is available in a wide range of sizes. It is most often used for beads, cabochons, carvings, and inlays. Although its popularity fluctuates in fashion, it is a perennial favorite in the American Southwest.

The use of turquoise dates back to 3000 B.C.- 4000 B.C.in the Sinai. It was the primary holy stone for Native Americans living in the Southwestern United States. Every Navajo carried a "personal" piece of turquoise.

Magical properties - The main property of Turquoise is to reconcile all hostile forces, to stop quarrels, to establish peace in the family and to take away anger. It strengthens intuition, increases independence, ambition, bravery, an insight and a constancy. In the Middle Ages people believed that if woman wishes to win over a man, she should secretly sew in a piece of Turquoise in his clothes.

Turquoise is the birthstone for the month of December.     Element: Earth 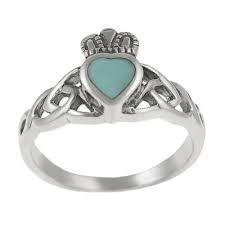 The Claddagh Ring - One of the most historically significant features of the turquoise ring goes back centuries and is said to have originated in a little Irish village called Claddagh. The ring is made up of a heart which signifies love, hands clasping the center heart show friendship and the crown stands for loyalty. These aspects of the ring are symbolic of love and affection. It has always been a great choice as a Valentine's Ring and has also been used as a mothers day ring.

The story of the beautiful Claddagh Ring began over 300 years ago, in the ancient fishing village of Claddagh on the west coast of Ireland.
Legend tells us a fishing boat from the village was captured by pirates and the crew taken and sold as slaves. One of the crew, Richard Joyce (who was to have been married that
very week) was sold to a Turkish Gold Smith. During his captive years never forgetting his girl back home, he made a ring of gold for her with a turquoise stone.

After many years Richard earned his freedom and returned to Claddagh, and found his wife had never given up hope of seeing him again. He gave her the ring and they were married never to be separated.